Vegetarian and pescetarian diets linked to lower risk of coronary heart disease, but vegetarians may have higher risk of stroke than meat eaters

Vegetarian and pescetarian diets may be linked to a lower risk of coronary heart disease (CHD), than diets that include meat, suggest the findings of a large UK study published in The BMJ today. However, vegetarians had a higher risk of stroke than meat eaters, particularly haemorrhagic stroke (bleeding into the brain), which the researchers suggest may reflect low blood levels of total cholesterol or a low intake of certain vitamins.

In recent years, more people have been turning to vegetarian and vegan diets, in part due to the perceived health benefits, as well as concerns about the environment or animal welfare. However, the full extent of the potential health benefits and risks of these diets is not well understood.

Previous studies have suggested that vegetarians have a lower risk of CHD than non-vegetarians, but data from large studies are limited and little has been reported on the difference in risk of stroke.

Researchers from CEU used data from the EPIC-Oxford study, a prospective cohort with one of the largest number of vegetarians, to explore the risks of CHD and stroke in meat eaters, pescetarians (who eat fish but not meat) and vegetarians over an 18 year period.

There were 2,820 cases of CHD and 1,072 cases of stroke during the study period, including 519 cases of ischaemic stroke (when a blood clot blocks the flow of blood and oxygen to the brain) and 300 cases of haemorrhagic stroke.

After taking account of potentially influential factors, such as medical history, smoking, physical activity and use of dietary supplements, pescetarians and vegetarians had, respectively, a 13% and 22% lower risk of CHD than meat eaters.

This is equal to 10 fewer cases of CHD in vegetarians than in meat eaters per 1000 people consuming such diets over 10 years. The difference may be at least partly due to lower BMI and lower rates of high blood pressure, high blood cholesterol and diabetes linked to these diets, say the authors.

In contrast, vegetarians had a 20% higher risk of total stroke than meat eaters, equivalent to three more cases of stroke per 1000 people over 10 years, mainly due to a higher rate of haemorrhagic stroke.

Vegetarians in the study had lower circulating cholesterol and levels of several nutrients (e.g. vitamin B12) than meat eaters, which could explain these findings, the authors suggest.

As an observational study, this research cannot establish cause, and because the findings were based mainly on white Europeans, they may not be applicable in low and middle-income countries.

Dr Tammy Tong said “The study had a large sample size and long-term monitoring, but further research is needed to replicate the results in other populations and it should include further measurements of nutritional factors." 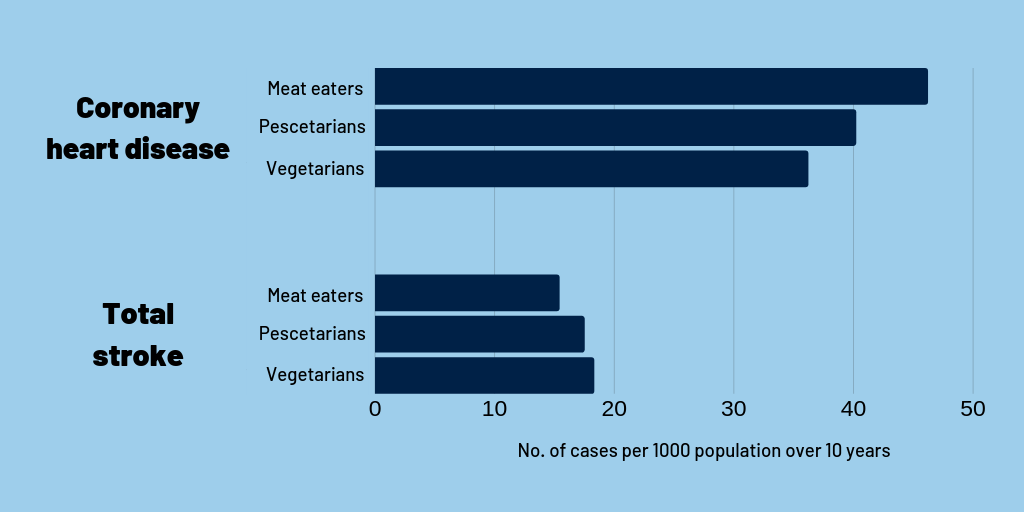